When building business, critical digital products, and services, your options are either hiring your own team of IT talent, using an external vendor, or a combination of both (hybrid model). In this article, I’m looking into the pros and cons of all these approaches.

Whether your organization is a startup or an enterprise, it’s natural to think that all the required technical competencies should be in your own company — after all, you are developing something that has a clear business impact. However, unless you are building something very novel, it is often easier to rely on an external partner, either from close by, nearshoring, or offshoring.

A lot of our time at East goes to helping our clients choose the right working model and the right type of partners for different scenarios.

Building your own IT development team – what do you need to know?

Even though there are many challenges in building your own development team internally, sometimes it’s still the best way to go. In most cases, I would recommend having at least some know-how in-house if you are building something else than a prototype. It does not have to be someone in a CTO or architect role, since a developer that maintains the system might be much more valuable than an architect depending on the life of the product after the first phase.

Some of the scenarios where it makes sense to consider building your own team:

Six IT outsourcing challenges you will definitely face

Looking purely at cost, developing your own team might seem cheaper than outsourcing. If only it was that simple.

Here are some of the reasons why IT hiring might turn out to be challenging and costly:

Why do businesses choose IT outsourcing?

According to Deloitte, the primary reasons Enterprises outsource software development are: 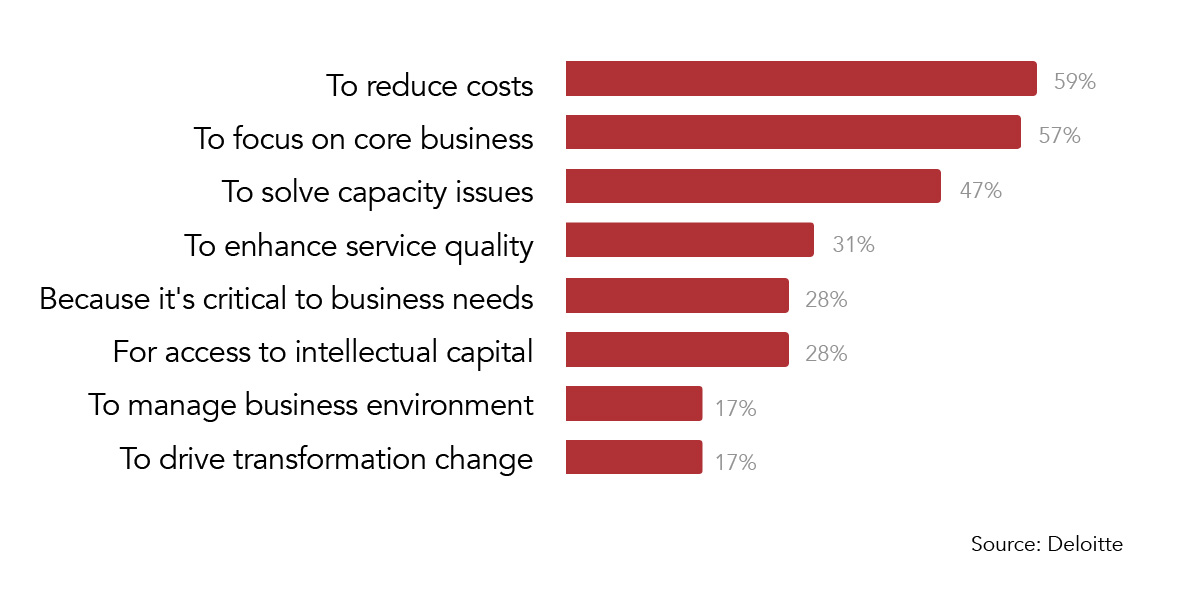 This data is a few years old and gives us an interesting perspective on which way the trends are moving. In practice we’ve seen the “focusing on core business” and “solving capacity issues” as reasons for outsourcing, growing faster than other areas.

What are the most common IT Outsourcing models?

There are three different models to work with an outsourcing partner, which we look at next: fixed scope, on-going development with time and material basis, or the combination of the two (hybrid development model).

Developing IT project with a fixed scope

If the development project’s scope can be defined in advance, it’s even more suitable for outsourcing. Typical examples of a development venture where the budget is spent on the first version and that have a scope that can be defined fairly clearly: prototypes, proof-of-concepts, websites, and enterprise apps that are not expected to change. Here are your possible IT contracting models: fixed quotation or time & material (T&M).

On-going development of an IT venture

If your software development project’s scope is more fluid, it doesn’t mean that the work could not be outsourced, but that simply means that your contracting model is time and material, you pay for talent’s time instead of the deliverable. Even if you start with a fixed scope, you are more likely to switch to time and material basis after the initial fixed scope phase.

Outstaffing — hybrid model between own team and outsourced talent

Due to the difficulties listed above about building your own team, very often an outstaffing approach works the best. In many cases, a hybrid model, where some developers are on the payroll and some services or resources are bought from an external vendor, gives you the best results and flexibility. You want to avoid situations where some knowledge is only with one internal developer, creating too big of a dependency risk. This same dependency risk can happen also with the external vendor, creating what’s called a vendor lock. Sometimes this simply can’t be avoided and becomes a risk that you need to take. Partner selection will be covered in another post which also deals with how to avoid this situation.

When building a hybrid team, a sense of unity matters a great deal. Treating contracted developers as if they were part of your own team usually yields the best results. When setting up a hybrid team, cultural compatibility, and communications matter even more than an exact technology talent match. Your own team needs to embrace and respect external talent.

What NOT to do when outsourcing IT

The sad fact is that IT outsourcing doesn’t always succeed. Just like a project can fail with an internal team, the same can happen with an external partner. Reasons for the failure are usually a little different though, and in order to manage risks, it’s good to be prepared.

After having witnessed all these problems in real life, one of the things we continually develop at East are practices to avoid them before they happen. Sometimes clients and vendors wonder why we get involved in phases that go beyond simple matchmaking — we want each and every outsourcing to be a success.

IT outsourcing: The key takeaway

Hiring developers or outsourcing development is a decision that depends on your goals and resources. Finding tech talent for your own team might prove to be harder than initially estimated. In most other cases, going to a vendor that has an experienced team can save you a lot of time, money, trouble, and headache along the way.

I’m a Finn who’s worked with IT offshoring and nearshoring for close to 20 years, out of which I’ve worked for 15 years with Bulgarian colleagues, both as a customer, provider, and a consultant. I currently aid Nordic companies to source talent from Bulgaria and help align expectations for both sides and set up processes to improve the efficiency and success rate of IT offshoring and nearshoring ventures.